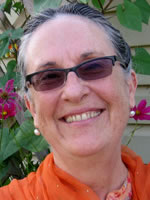 Lopön Helen Berliner has been a student of Mindrolling Jetsün Khandro Rinpoche since 1994. From 1970-87, she was a student of Chögyam Trungpa Rinpoche in the Shambhala Buddhist tradition; and has been fortunate to receive teachings and empowerments from masters of the four great lineages of Tibetan Buddhism. Earlier training in wisdom traditions, East and West, provided the foundation for her path. Ever grateful for the celebration of dharma in the western world, she has worked as editor and/or indexer of books by authors including Chögyam Trungpa Rinpoche, Jetsun Khandro Rinpoche, Dzigar Kongtrul Rinpoche, Ane Pema Chödren, and others. Lopön Helen has degrees in fine arts and psychology, a master’s in Buddhist Studies specializing in environmental psychology, and is the author of Enlightened by Design. As a teacher of Buddhism and contemplative disciplines for over forty years, she delights in sharing the magic, challenges, and ubiquitous potential of the path of practice. 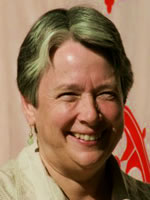 Lopon Jann Jackson began her study and practice of buddhadharma in 1975 under the guidance of the Vidyadhara, Chogyam Trungpa Rinpoche. In 1994 she began receiving the profound wisdom teachings from Her Eminence Jetsün Khandro Rinpoche and has been under her guidance since that time. Lopon Jann has also been blessed by receiving teachings and transmissions from H.H. Mindrolling Trichen Rinpoche, H.H. Dilgo Khyentse Rinpoche, H.H. the Dalai Lama, H.H the XVI and XVII Karmapa, H.E. Jamgon Kongtrul Rinpoche and H.E. Dzigar Kongtrul Rinpoche. She is deeply committed to supporting the transmission of the buddhadharma in the west and in supporting students in their practice and studies. Lopon Jann also received a master’s in psychology and has worked in the human services field for the last 40 years. 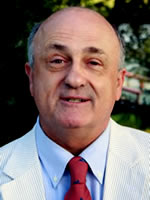 Andre Papantonio began studying and practicing the Buddhadharma in 1980 at the Baltimore Shambhala Center, and studied with Chogyam Trungpa Rinpoche at the 1984 Vajradhatu Seminary. He met Mindrolling Jetsün Khandro Rinpoche in 1994 and has studied and practiced under her guidance since then. Lopön Andre has been honored with the opportunity to serve Rinpoche in various capacities, including helping to guide the newest students as they enter the path of Mahayana at Lotus Garden and in the Baltimore Study Group. Andre teaches several weekends each year at Lotus Garden, and travels occasionally to teach in other cities. He is particularly interested in bringing Mahamudra and bodhicitta practices to life in the hearts of students and in his own heart. As his own small understanding of our fundamental Buddha Nature grows, he is especially eager to encourage students to discover, and rest in, their own natural state.

Lopön Barbara Ryan has been a student of H.E. Mindrolling Jetsün Khandro Rinpoche since 1996 and was named a lopön in 2005. She became a Buddhist practitioner in 1980 in the Shambhala tradition with the Venerable Chogyam Trungpa Rinpoche.

For several months each year since 2000, Lopön Barbara has resided at Samten Tse Retreat Center in India. During that time she has had the good fortune of receiving transmissions and teachings at Mindrolling Monastery from Kyabje Mindrolling Trichen Rinpoche, Kyabje Trulshig Rinpoche, and Kyabje Tsetrul Rinpoche.

Lopön Barbara has served in her sangha as a meditation instructor and teacher for over 25 years. She has lived as a resident at Lotus Garden since it began in 2003, served as resident manager until 2010, and continues to coordinate the Office of Practice and Study. Her ongoing commitment and approach to the practice and study of the Dharma relies upon the value of living in community, the importance of retreat, and the discipline of service to the teacher and sangha. 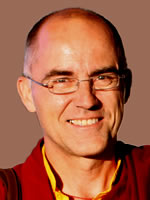 Drupön Roar Vestre has been a student of Her Eminence Jetsün Khandro Rinpoche since 1994. His other primary teachers have been the late Tenga Rinpoche, the late Kalu Rinpoche, Tsoknyi Rinpoche, Ringu Tulku Rinpoche and Chökyi Nyima Rinpoche. Drupön Roar has received teachings and empowerments from many of the main teachers of all the four main lineages of Tibetan Buddhism and completed a three-year retreat from 1980 to 1983 under the guidance of the late Venerable Kalu Rinpoche. Since 1984 he has also served as a teacher at Karma Tashi Ling, Oslo, Norway. Lama Roar became the Drupön (Retreat Master) of Lotus Garden in 2005.